This past Saturday, Citronelle hosted their annual Sweet Hope party – a benefit for St. Jude Children’s Research Hospital. Guests bring an unwrapped children’s toy or monetary donation for entry and then can indulge in Michel Richard’s incredible desserts. A variety of desserts are served up by elves right in the kitchen. And it wouldn’t be a holiday party without champagne, eggnog and delightful hot chocolate. 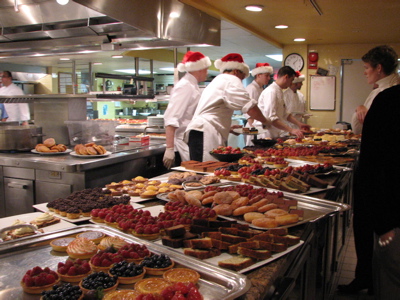 And of course, Chef Richard was on hand and signing autographs for his book – Happy in the Kitchen.

Hot Off the Press: Michel Richard to “open” a restaurant in LA

Straight out of the LA Times this morning is news that Michel Richard will once again be the culinary director at Citrus at Social, which is part of Jeffrey Chodorow’s entertainment complex on Sunset Boulevard.

Not to worry though, Richard said he is not leaving Washington and though the food will be “100% mine” he will only be stopping by Citrus in California once a month to check on things.

The reason for opening restaurants around the country when Citronelle and Central are doing so well? Richard said, “I need the money. I’ve got six kids and college costs $60,000 a year before taxes.”

Richard is also working on opening Citronelle at Carmel Valley Ranch and a restaurant at Caesars Palace in Las Vegas (opening in 2009).